The 2016 NFL season comes to an end on Sunday when the AFC Champions, the New England Patriots, take on the NFC Champions, the Atlanta Falcons in Super Bowl LI, which will be played in Houston, Texas. The game is scheduled to begin at 6:30 PM ET.

***Bet365.com is offering a 100% up to $200 sign up bonus for new NFL bettors.  They’re our top rated sportsbook for betting online!  Check out our full review here.

Here are the betting lines from Bet365.com:

The Falcons defeated the Green Bay Packers in the NFC Championship Game to advance to their second Super Bowl in franchise history. Despite people doubting just how good they were during the regular season, the Falcons silenced their critics with a convincing win over the Packers, who a lot of people thought would advance to the Super Bowl. 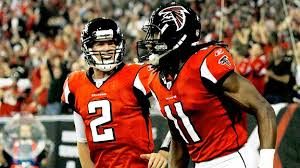 Ryan and Julio are both going to have to have huge games if the Falcons are going to keep pace with Brady and the Pats in this game.

Most of Atlanta’s success this year was due to the play of Matt Ryan, who is one of the top candidates for the league MVP this season. Wide receiver Julio Jones and running back Devonta Freeman, also helped make the Falcons offense one of the best in the NFL.

The New England Patriots came into the season with the best odds of winning the Super Bowl despite not having quarterback Tom Brady for the first four games of the season. After a 3-1 start without Brady, the team won 11 of the 12 games Brady started, giving them the best record in the AFC.

The Patriots defeated the Pittsburgh Steelers quite convincingly in the AFC Championship game, and are heading into the Super Bowl as the betting favorites.

After watching New England shut down Pittsburgh’s high octane offense, the Falcons will try to avoid the mistakes Pittsburgh made. Julio Jones, who dealt with injuries during the season, says he is healthy and ready to go. If Jones is at full strength, he will be a matchup problem for the Patriots because of his size and speed.

Freeman will also be a player the Patriots have to pay extra attention to because he is capable of breaking a long run at any time and he is also an excellent receiver out of the backfield.

Matt Ryan will need his offensive line to keep protecting well, and give him enough time to find his open receivers.

The Patriots were also one of the best offensive units in the league this year, but unlike the Falcons, they don‘t have a game changer like Jones in the lineup. Brady will have to rely on veteran receiver Julian Edelman and tight end Martellus Bennet to keep the chains moving in this game and put the team in position to score some points.

The Falcons will make this a competitive game, but the Patriots have been playing with a chip on their shoulder all year and have been on this stage multiple times, giving them the edge. New England wins and covers the spread. This is also expected to be a high scoring game, so take the over on points scored.